>> They tried to suppress the Church.

To overcome this tyranny, the Christians, calling themselves, “Cristeros”…

One of the most famous “Cristero” was a young priest named Padre Miguel Pro.

Caught for the many ‘illegal’ Christian services to the people, the government would arrest him…

… and he would be sentenced to public execution.

The president thought that Padre Miguel Pro would beg for mercy

>> And so he invited a number of people including the press, to the execution.

Padre Pro however, did not plead for his life

>> Instead, he knelt, holding a crucifix.

When he finished his prayer – after having forgiven the executioners – he kissed the crucifix and stood up.

>> Holding the crucifix in his right hand, he extended his arms and shouted: “Viva Cristo Rey!”

At that moment the soldiers fired!

The brave “Cristero” had offered his life for the Master!

… willing to boldly proclaim – every day and in every situation – the mighty cry: “Viva Cristo Rey – Long live Christ the King!”

Today is the Feast of Christ the King. 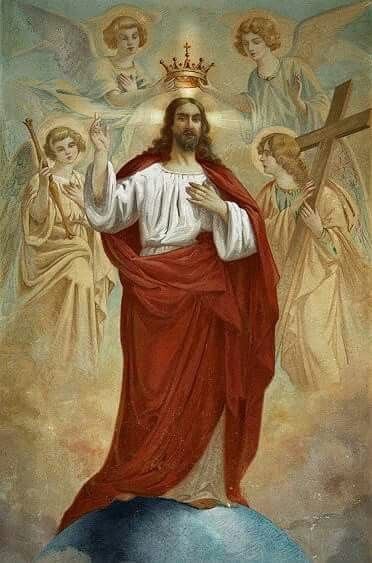 >> It is the Last Sunday of the Liturgical year

This feast is a relatively new feast.

>> It was established by Pope Pius XI in 1925 through an encyclical letter called “Quas Primas” (In the First) .

In the history of the Church, liturgical feasts have been instituted in answer to particular needs that arise in the life of the world & Church.

This Feast of Christ the King was in response to the grave and disturbing situation of the world:

The world in 1925, was still recovering from the devastation effects of the First World War.

>> Nations had been devastated.

>> New weapons and armoury had been introduced.

A wave of terror and danger was still vivid.

>> Modernity had crept into the human mind.

Human reason was considered to have enough power and capability for unlimited progress.

>> Human societies were abandoning Christian values and sought to do away with divine and spiritual dimensions of life.

It’s at the height of this secularization of the world, that we are presented with this great Feast of Christ the King.

> Human progress gives a feeling that humans have absolute power over all forces in the universe.

> Scientific technology makes us think that any discoveries and inventions are humanly possible.

> Human mind is considered to be having capabilities that can overcome and defy any limitation..

But this feast reminds us, that Christ still reigns above all.

>> He is the source of every intelligence and intellect.

>> He is the powerhouse of every discovery and invention.

>> He is the ultimate in conquering any problems or difficulties.

The Kingdom of Christ the King is under several threats today…

>> The forces of materialism and consumerism…

… have clouded the minds of several with riches and pleasures.

>> The forces of sensualism and sensationalism…

… have corrupted many innocent hearts and destroyed many simple minds.

>> The forces of authoritarianism and individualism…

… have shattered many families and community lives.

>> The forces of relativism and practical atheism…

… are strongly raging against the practice of faith and the teachings of the Church.

As Christians, we are soldiers belonging to the Kingdom of God, with Christ as our King.

… am I deeply convinced of my faith and love for Christ and His Kingdom?

… am I passionately enthusiastic to live my Christian virtues in this world?

There are many who say that they are willing to give up their lives and die for Christ.

>> But today, the Lord also demands, “Are you willing to LIVE for Christ?”

There is an urgent need to become Christ the King’s living witnesses in this world.

Kings are often identified with a lot of pomp and grandeur and power and triumphalism.

>> But Christ our King is not bothered about any such external pageantry or vain flashiness.

Then what is the identification of this Christ the King?

>> The answer to this question will be found at the end of the Gospel, with Jesus hanging on the Cross and a statement which reads in Mt 27:37, “This is the King of the Jews”!

The Gospel of the Day presents Pilate questioning the Kingship of Jesus.

Where the Cross is, there is Christ the King!

>> Where the lost, the sinful, the abandoned and the lonely are… there is Christ the King.

>> Where the poor, the suffering, the miserable and the abused are… there is Christ the King.

The Cross is the identity and symbol of Christ the King!

As this Crucified King’s soldiers, we too are invited to be sharers in the Cross of Christ.

It is said that people who are crucified with Christ will have three distinct marks:

Since they are crucified…

1. They can only look in one direction

2. They can never turn back

3. They no longer have plans of their own.

And these three characteristics ought to reflect in our Christian lives…

Yes, let us Hearken to His voice…Christ, the King – The Great King.

> No land to reign, but our hearts…

>> No majestic throne, but the Cross…

>>> No mighty army, but a few people to spread His word…

>>>> No royal treats all the time, but pain and suffering that leads to salvation…

>>>>> No grand fiesta, but the sacrifice of the Calvary, in the Most Holy Eucharist…

This King – along with His Blessed Mother, the Queen, Who stood at the Foot of the Cross with absolute faith, hope and love – invites us today to renew our commitment to Him

>> Royalty is less, but faithfulness is assured!

>> Popularity is rare, but blessings are plenty!

Are we ready to be a true “Cristero”…

… willing to boldly proclaim – every day and in every situation – the mighty cry:

Happy Feast to all the “Cristeros” – the Valiant and Faithful Soldiers of Christ, the Awesome King!