These were words, exclaimed by Rakesh Sharma – with a jubilant face and an excited voice – high up in the outer space.

>> The first man to go up to space from India, was replying to the query by Indira Gandhi, the Prime Minister of India, as to ‘how the nation looked from the outer space’.

“Saare jahaan mein acha!” (“Better than all in the entire world!”)

These were probably the Words, exclaimed by God – with a Radiant Face and a Splendid Voice – transcending the entire universe, looking at Blessed Mother Mary.

>> These triumphant words are proclaimed and repeated by the entire Church in unison and acclamation!

Rakesh Sharma stated India to be the Better than the Entire world!

>> God declared Blessed Mother Mary to be better than all in the Entire World!

… the Independence Day of India and the Assumption of our Blessed Mother Mary!

This day has much to teach us… much to thank the Lord… and much to exhort us!

The Solemnity of the Assumption of our Blessed Mother Mary celebrates Jesus, the Son-King sharing His Glory with His Mother.

Human kingdoms have followed the tradition of the son who is the King of the Land, crowning his mother, as the Queen of the Kingdom.

The Old Testament bears witness to this fact:

>> King Solomon on assuming charge of the throne, after King David, raised his mother Bathsheba to his side, to be the royal queen (1 Kings 2: 19)

The Assumption of Mother Mary is one of the four Marian Dogmas that the Catholic Church pronounces. 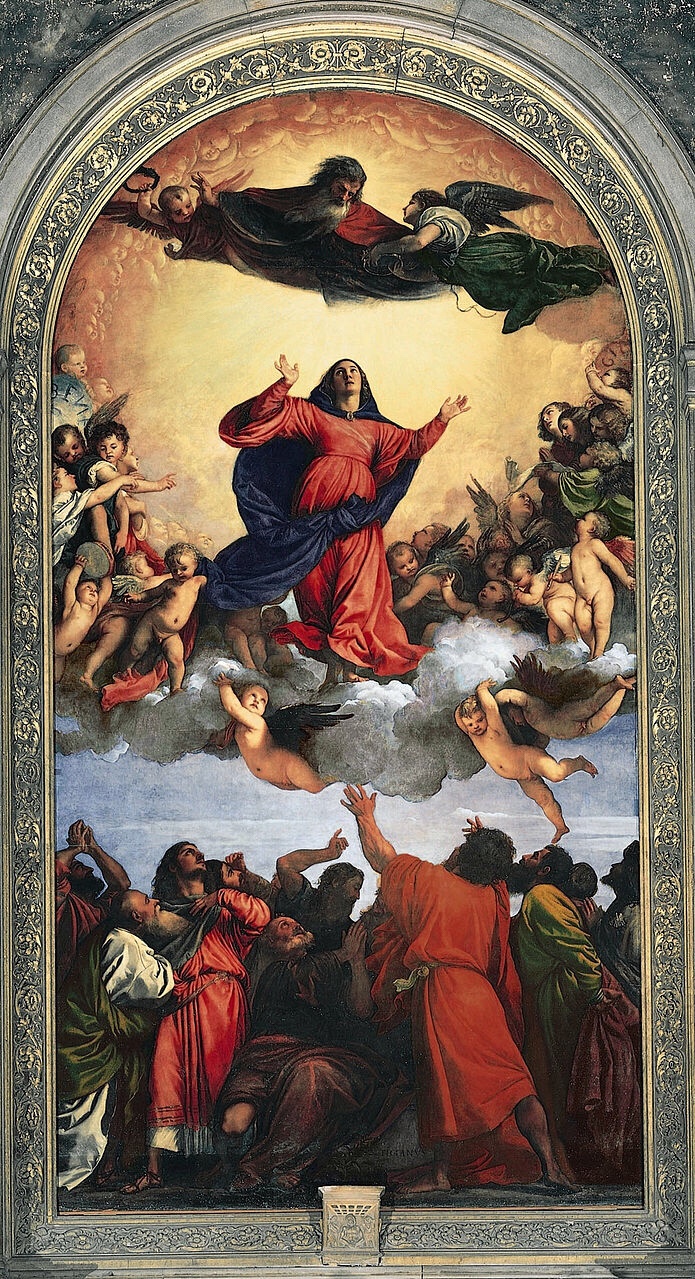 A dogma is a doctrine that is solemnly proposed by the Church as formally revealed in Scripture or Tradition.

The four Marian Dogmas are:

1. Mary as the Mother of God

2. The Perpetual Virginity of Mary

3. The Immaculate Conception of Mary

4. The Assumption of Mary into heaven

The declaration of the Dogma of the Assumption of Mary is as follows:

“By the authority of our Lord Jesus Christ, of the Blessed Apostles Peter and Paul, and by our own authority, we pronounce, declare, and define it to be a divinely revealed dogma: that the Immaculate Mother of God, the ever Virgin Mary, having completed the course of her earthly life, was assumed body and soul into heavenly glory.”

This Dogma of the Assumption was proclaimed on November 1, 1950, by Pope Pius XII in the Apostolic Constitution “Munificentissimus Deus”

This proclamation was not defining something new in the Church…

… rather it was an official recognition of the centuries-old belief on Christians about the Assumption of their Heavenly Mother.

The Feast of the Assumption is one of the most important feasts of our Lady.

The Assumption was the reward God granted to our Blessed Mother for the Right use of Her Freedom!

Freedom plays a vital role in the destiny…

>> Mamma was requested to be a Silent Contemplative during His boyhood …

A responsible use of freedom is a sign of true and authentic spirituality and is a pathway to greater glory!

>> Freedom is not simply doing what we want…

… Freedom is assuming responsibility for ours and others’ lives!

>> Freedom is not simply getting our pleasures fulfilled…

… Freedom is fulfilling our tasks in the best way possible!

The Assumption of Blessed Mother Mary is an invitation and a challenge for each one of us….

… To focus our attention on things of heaven & transcendence and not get fixated with cares of this world!

… To live a life of holiness and purity and seeking to do God’s will at all times and in every situation!

… To share with the pain and passion of the Lord and become partakers in the salvation of the world!

… To realize that to be Holy & a Saint is a call of every Christian & we need to prioritize our life on them!

We need to be reminded that Mary had exclaimed, “Behold, I am the Handmaid of the Lord” (Lk 1:38)

Mary was an ordinary human being.

>> She too had Her ordinary and humble beginnings.

>> She too went through common life’s struggles and strains.

But through these “ordinary” circumstances…

• God “raised” Her to the Heights

• God “assumed” Her into Glory

This then is our call too…

>> As Baptized Christians, we have “found favour” with God.

We dwell in “ordinary” circumstances of life – with hardships and pains.

But if we also…

• seek and live the Will of the Lord at all times

• constantly submit to what He wants

• and dutifully bow to His mercy and grace

… the glory which Jesus has “won” for us at Resurrection, can be ours!

>> In the “Story of the Fall” a mother (Eve) had been involved intimately with a man (Adam) and humanity fell into the sea of sin!

>> In the “Story of the Rise”, a Mother (Mary) was involved intimately with a Man (Jesus) and humanity is promised to “assume” to the skies of glory!

Are we ready to co-operate with God’s plans in our lives, just as Mother Mary did…

… and thus receive the “Privilege of Assumption into Glory” just as Mother Mary received?

Today is a BIG Day..

… a Day to thank the Lord for our nation’s freedom and her valiant freedom fighters!

Let us become mindful of our Loyalty & Obligation to our Nation…

… safeguard the Precious Gift of Freedom!

Let us become conscious of our Responsibility & Duty to the Lord…

… grow in the Prized Treasure of Holiness!

May Blessed Mamma intercede for our Beloved Nation India…

>> And may we hold Her loving hands…

… as we seek to grow in Holiness and making the best use of our freedom as Children of God!

… and a Happy Feast to all of us, Her little ones on the earth!

>> A Very Precious Future to Mother India, on her Independence Day…

… and a Precious Day to all of us, her beloved citizens!